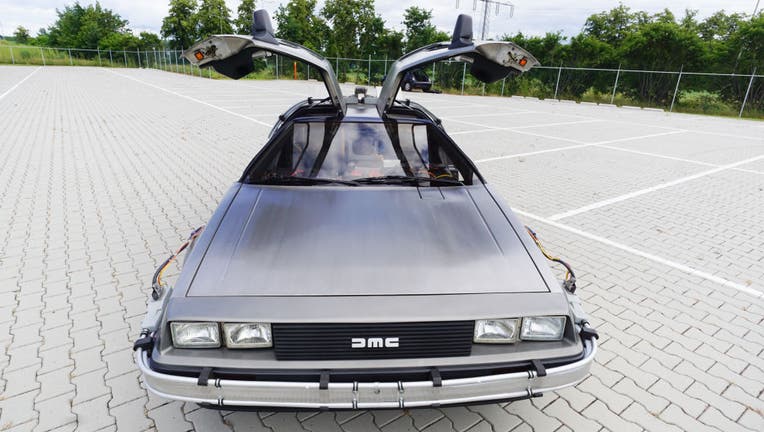 Picture of the exterior of a remote controlled DeLorean.

LOS ANGELES – It may not time travel, but the DeLorean sports car is finding its way into the future.

In honor of the 41st anniversary of the first production of the DeLorean DMC-12 on Jan. 21, fans of the time-traveling car may soon see the iconic vehicle traveling up to 88 miles per hour on local highways.

The car nearly made a comeback in 2013 when The Orange County Register reported the DeLorean Motor Co. – the eponymous, modern-day successor to the original company founded in 1982 by General Motors executive John DeLorean – was doing brisk business transforming surviving DeLoreans into replicas of the time machine Michael J. Fox, or Marty McFly, used to travel 30 years into the past to save his family from oblivion.

Since then, many fans of the car have tried to resurrect the automotive timepiece into time machines of their own.

In 2018, a real flying DeLorean was listed on eBay.

Well, it’s technically a hovercraft that looks like a DeLorean, and Marty McFly still isn’t real, but 10% of the selling price has been pledged by the owner to the Michael J. Fox Foundation for Parkinson’s Research.

The vehicle isn’t a converted DeLorean but its body has been designed from Styrofoam and fiberglass to look like one. The seaworthy craft does have functional gullwing doors and it rides on top of a conventional hovercraft chassis that uses two engines to power a 24-inch fan for lift and a 36-inch fan for thrust.

For decades, people have spent thousands of dollars to have DeLoreans outfitted to resemble the one that starred in the 1985 movie “Back to the Future” starring Michael J. Fox and Christopher Lloyd since the car’s original company went out of business in 1982.

About 9,000 DeLorean DMC-12 cars were produced from 1981-1982 before the original company went bust. About 6,500 are believed to still exist, easily recognizable with their boxy, stainless steel bodies and gullwing doors.

The current brand owner, DeLorean Motor Co. of Huntington Beach, handles everything from oil changes to full reconstructions. But as the film “Back to the Future” became more of a staple in popular culture, there has always been an increase in requests to recreate the movie’s iconic car.

The DeLorean Motor Co. posted an update on its website on Jan. 19 that the 2015 passage of the “Low Volume Motor Vehicle Manufacturers Act” (H.R. 2675) which the company said “creates a reasonable regulatory structure allowing small companies to produce a limited number of completed replica motor vehicles that resemble the appearance of cars produced 25 years ago or more.”

There is currently a pre-order application for anyone wanting to get their hands on the car.

This means obtaining a DeLorean might not be as exclusive as it previously was.

In 2013, The DeLorean Motor Co. was charging $45,000 for a replica. Passengers could punch in a “destination time” on the control panel and pull a lever to activate the pulsing lights of the time circuit. The parts are recreated using military surplus and other equipment, such as a jet engine oil cooler.

“I’ve grown up around DeLoreans my entire life. I was dropped off to kindergarten in the actual ‘Back to the Future’ car. A DeLorean was my first car at age 16,” Cameron Wynne, DeLorean Motor Co. general manager told the Associated Press back in 2013. “‘Back to the Future’ has been a huge part of the business. The car is so well known from a 90-year-old person to a 4-year-old because of that movie. That shows how timeless the car and the brand is.”