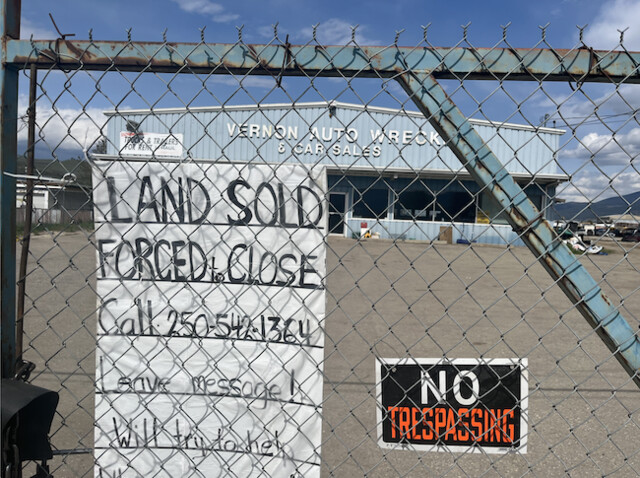 A sign on the gate at Vernon Auto Wreckers says the land has been sold.

The front parking area has been cleared out, and from the gate, it appears removal of vehicles in the yard has already begun.

The business’s voicemail says the auto sales side of the operation will continue, although the location is unknown at this time.

The area in Vernon’s Anderson Subdivision has been undergoing a transformation over the last several decades that began with the Highway 97 bypass, development of Vernon Square Mall, Kal Tire Place, and more.

The property was bought by The Vaults, which offers luxury storage for exotic cars and other high-end toys in loft-style “storage condominiums.”

The project is currently under construction, and principal Joe Mahovlich says he had bid on the adjacent property, but it eventually went to a developer from the Lower Mainland.

Sydney Tilstra with Langley-based Wesmont Group confirms the company has purchased the site.

Details are still in the planning stages, but it will be used for an industrial/commercial development, with units for lease.

Wesmont is a commercial and residential developer with projects in the Fraser Valley, Surrey, Armstrong, Coquitlam and Victoria. It also operates a charitable family foundation.

In recent years, the auto wrecker properties have become increasing surrounded by development, from hotels to restaurants.

A spokesperson at Coldstream Truck Parts on 48th Avenue, at the opposite end of the Vernon Auto Wreckers site, confirmed that property has also been sold as part of the deal.

“We have two years to be out,” said employee Rod Ellis, so for now, it’s business as usual.

“We’re actively looking for a place to relocate,” he said.

The closure of Vernon Auto Wreckers leaves no wrecking yards in the city. The closest are in Armstrong and Lumby.