BANGKOK — As the global automotive industry undergoes a radical shift toward electrification, Thailand, the manufacturing hub of Southeast Asia, is emerging as a new arena of competition for the world’s leading manufacturers.

China’s Great Wall Motors on Wednesday officially opened its first factory in Thailand’s Eastern Economic Corridor industrial zone of Rayong. It will focus on electric vehicle production for both the domestic market and export to ASEAN countries.

Great Wall is not the only big overseas company jumping into Thailand’s nascent EV market. Taiwan’s Foxconn has just announced a tie-up with Thai oil and gas conglomerate PTT to develop an EV production platform.

Key Apple supplier aims to meet the rising demand for EVs. Foxconn and PTT said they plan to spend around $2 billion to expand EV and EV parts production.

Analysts say the entry of Great Wall and Foxconn will intensify competition in the Thai auto market. The moves also pose a big challenge to the Japanese automakers that have dominated the local market for decades.

Great Wall’s new plant is its first smart factory in Southeast Asia and is equipped with advanced technology, including artificial intelligence and robotics. Great Wall bought the plant from General Motors last year and has been retooling it to make hybrids and EVs.

The opening ceremony was led by the company’s president, Elliot Zhang and Thai Industry Minister Suriya Juangroongruangkit. “This event marks an important milestone in Great Wall Motors’ globalization strategy, realizing our expansion into ASEAN, especially into markets for right-hand-drive vehicles,” Zhang said. He added that the plant will create 1,000 jobs and play a key role in delivering EVs to Thai and ASEAN customers.

Great Wall has not disclosed the cost of upgrading the plant, but it has announced plans to invest 22.6 billion baht ($726 million) in Thailand. The factory, with an annual capacity of 80,000 vehicles, will initially build hybrids, adding electric vehicles later.

Some 60% of the plant’s output will be for the domestic market, while the rest will be exported to markets where right-hand-drive vehicles are predominant. The company plans to launch four models this year in Thailand, including the Haval H6 sport utility vehicle and the Ora Good Cat compact electric car.

Foxconn and PTT, for their part, are working together to create an open platform to produce EVs and key components in Thailand. 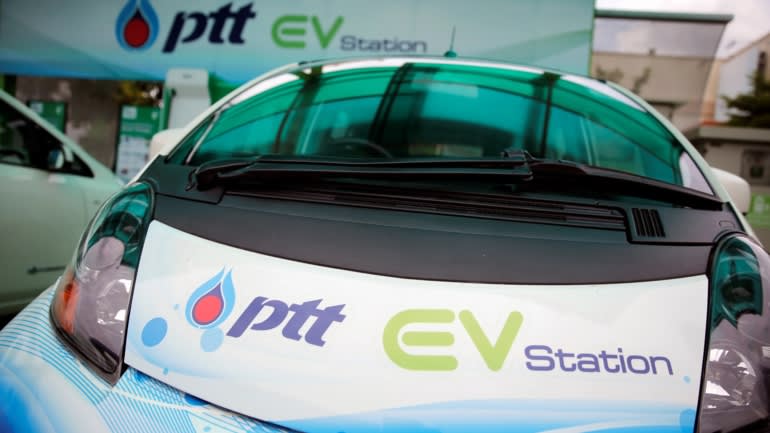 The Thai EV market is investment from a number of international companies in various industries hoping to take advantage of the shift to electric cars.

The collaboration is in its early stages and the companies’ plans remain sketchy. However, according to PTT, the platform will comprise hardware and software services, and will be open to all automakers looking to accelerate their production and sales of EVs in the ASEAN region, including Thailand.

The investment appetite from big companies has been stimulated by the Thai government’s ambitious plan to make the kingdom a hub of electric vehicle production. The National New Generation Vehicle Committee, chaired by Deputy Prime Minister and Energy Minister Spattanapong Punmeechaow, set a bold target to raise EVs to 30% of Thailand’s total unit sales, equal to around 725,000 cars a year, by 2030. The committee also hopes that 50% of the cars made in Thailand will be EVs by that year.

In an effort to develop the infrastructure for EVs, the government also approved investment incentives for battery charging and swapping businesses in mid-May.

Thailand’s EV promotion plan could affect global automakers’ strategies as well. The kingdom set out to become the auto manufacturing hub of ASEAN about 20 years ago, managing to attract investment from big Japanese carmakers, followed by automakers from Europe and the U.S. This created jobs and transferred technology that helped Thailand’s auto industry develop.

Now the kingdom is trying to become the top manufacturer and a major exporter of EVs in ASEAN. Unlike gasoline-powered vehicles, which require a large number of components, EV manufacturing is a relatively easy market to enter. The big changes in the automotive industry have drawn new players, such as Chinese and Taiwanese companies, one after another, which could shake up the market in Thailand, where Japanese brands hold a 90% share.

“The more players, the [more] fierce the competition in the market,” said Surapong Paisitpatanapong, vice chairman and spokesman for the Federation of Thai Industries automotive club. “And the key thing to attract buyers is competitive prices,” he said.

According to a study by Frost & Sullivan commissioned by Nissan and published in February, 66% of consumers across Southeast Asia believe they will adopt electrified mobility in the near future.

Japanese carmakers such as Toyota, Nissan and Honda, which have supported Thailand’s industrialization for decades, will be monitoring developments closely to maintain their strong market position.