But local dealers are weathering the storm. Jay Schmitt, of Jeff Schmitt Auto Group in Fairborn and Beavercreek, is finding ways past the bottlenecks.

“It has been interesting for us, but we are fortunate to have eight stores that can pull inventory from each other and absorb the ebbs and flows we’ve been experiencing,” Schmitt said. “The car business can be wrought with issues unique to our industry from year to year, but thanks to a wonderful employee family we have always overcome them.”

This year has been no different, and in fact Schmitt said he is enjoying record sales for the year. 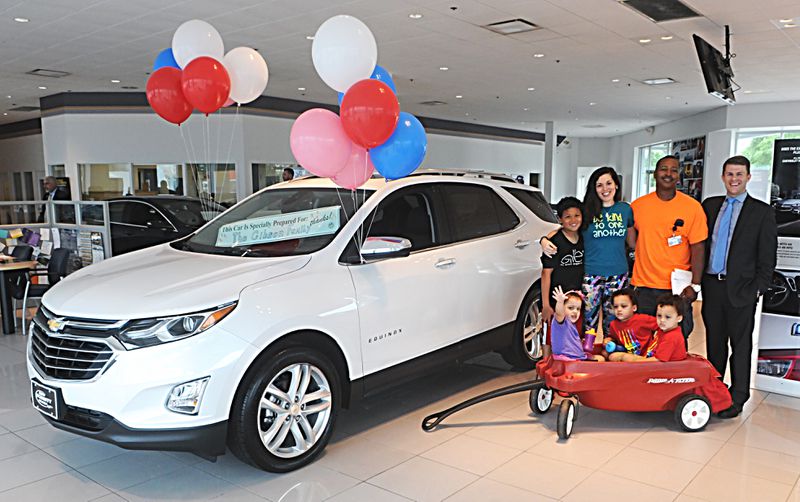 The Gibson Family with Jay Schmitt picking up their new car at the Jeff Schmitt Auto Group in Fairborn in this 2017 photo. The car was a gift from Ellen DeGeneres and Chevrolet. Photo Marshall Gorby

If dealers don’t have exactly what customers seek, they often can secure it from a trading partner or reserve an incoming vehicle, he added.

Zach Doran, president of the Ohio Automobile Dealers Association, agreed that this is a national issue.

“Statewide, I would say across all franchises, you’re seeing dealers at about 40% of their new car inventory that they’re accustomed to having,” Doran said.

He bases that on conversations with banks about floor planning numbers for dealers.

“It varies among franchises,” he added. “Some franchises are not as impacted as others. But everybody is impacted.”

The supply bottlenecks for computer microchips and seat foam are two of the principal reasons for the inventory pinch-points. The pandemic temporarily shut down auto production in the late winter and early spring of 2020, shifting production priorities among microchip producers, which is still felt today.

And a bad winter storm in Texas in February has affected production of automotive seat foam. The storm and resulting power outages in Texas temporarily halted chemical plant operations, affecting that area of production.

Both of those shortages affect production of SUVs and full-size trucks, which remain in high demand.

One result: Used cars already in lots are rising in value, Doran said.

“Consumers are kind of seeing the value of the used car sitting in their driveway skyrocket right now,” he said..

“Historically, tax refund season is a period of time when CarMax and the used auto industry see an increase in demand,” a representative of CarMax said in response to questions. “We believe this year is also benefitting from the addition of stimulus payments. In addition, demand for used autos is likely higher due to the current chip shortage that is impacting new car supply.”

CarMax says it is the largest buyer and seller of used cars in the U.S., with more than 30,000 vehicles currently available for sale.

New cars prices are rising, as well. The number of median weeks of income needed to purchase a new vehicle increased to 33.8 weeks from an upwardly revised 32.4 weeks in March, Cox Automotive said last month.

The ongoing chip and foam shortages have caused several automakers in North America and more around the world to modify schedules at production plants, according to national reports.

The problem is not new, but COVID and winter weather have sharpened it. A Cox Automotive survey of dealers last year found that limited inventory was the No. 1 issue holding businesses back, with 60% of responding dealers citing that as a problem. (Cox Automotive is a subsidiary of Cox Enterprises Inc., which also owns this newspaper.)