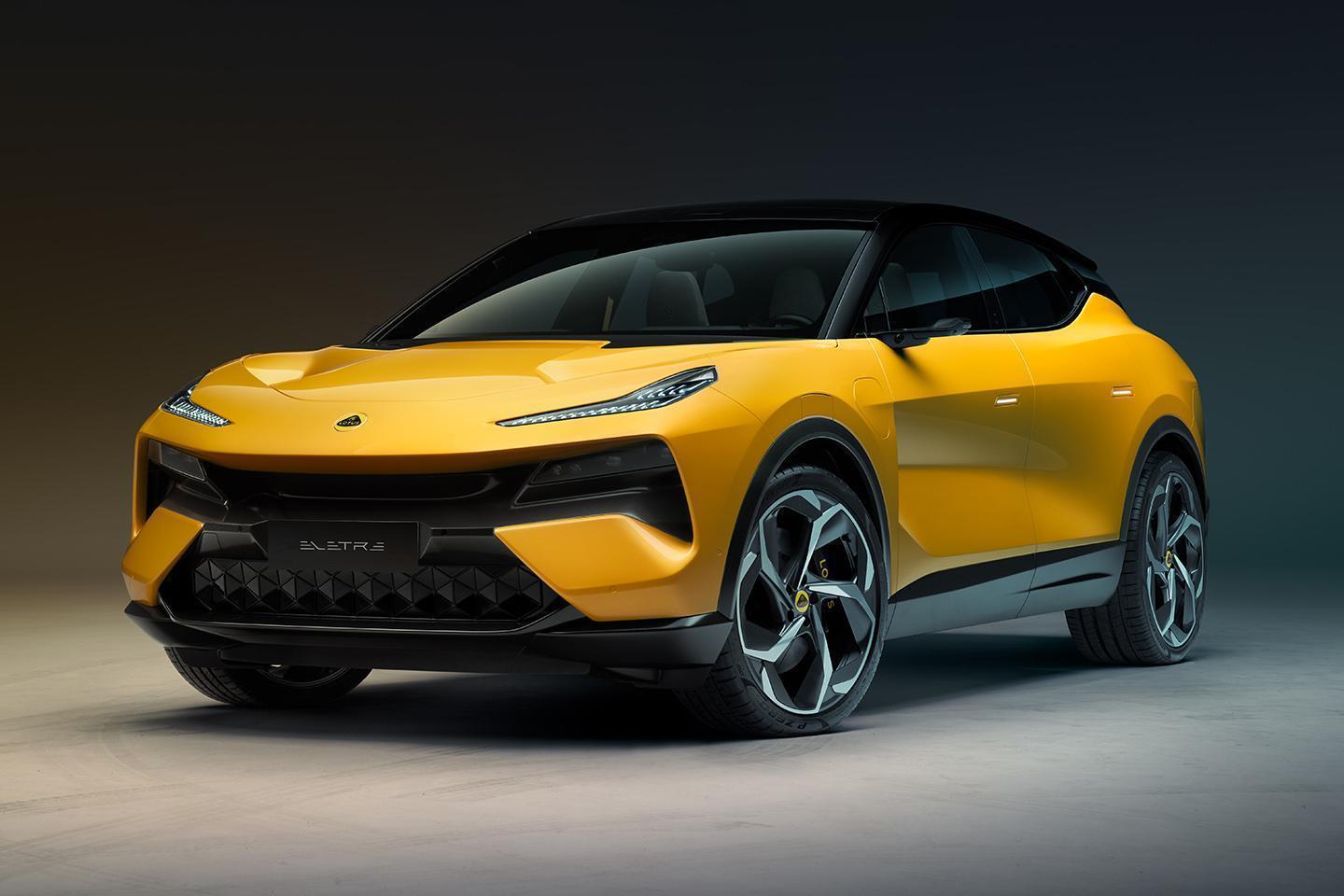 We knew this moment was coming, but – if you’ll forgive a lazy electric pun – it is still slightly shocking to see Lotus’s EV crossover in the flesh after it made its official debut in London this evening.

The statistics are equally electrifying, if limited at present. Some details haven’t been finalised, and others are being held back as part of the company’s drip-drip PR strategy. But there’s still no shortage of discussion points with the confirmation that, as launched, the Eletre will have all-wheel drive, at least 600hp, a sub-3 second 0-62mph time and a 162mph top speed. Lotus also says the battery pack will have more than 100kWh of capacity, and that it is chasing what will, if delivered, be a very impressive 373-mile range under Europe’s WLTP testing protocol.

I got the chance to see the Eletre in Lotus’s Coventry design studio late last year, and if your first reactions are similar to mine you’re probably thinking of the Lamborghini Urus. There is certainly a resemblance in the height of the bonnet line, narrow headlights, chunky front grille and side-on profile. The dimensions are flatteringly close as well, the Lotus’s sizeable 5103mm length, 3019mm wheelbase and 1630mm height all being within 20mm of the Lambo’s corresponding measurements. 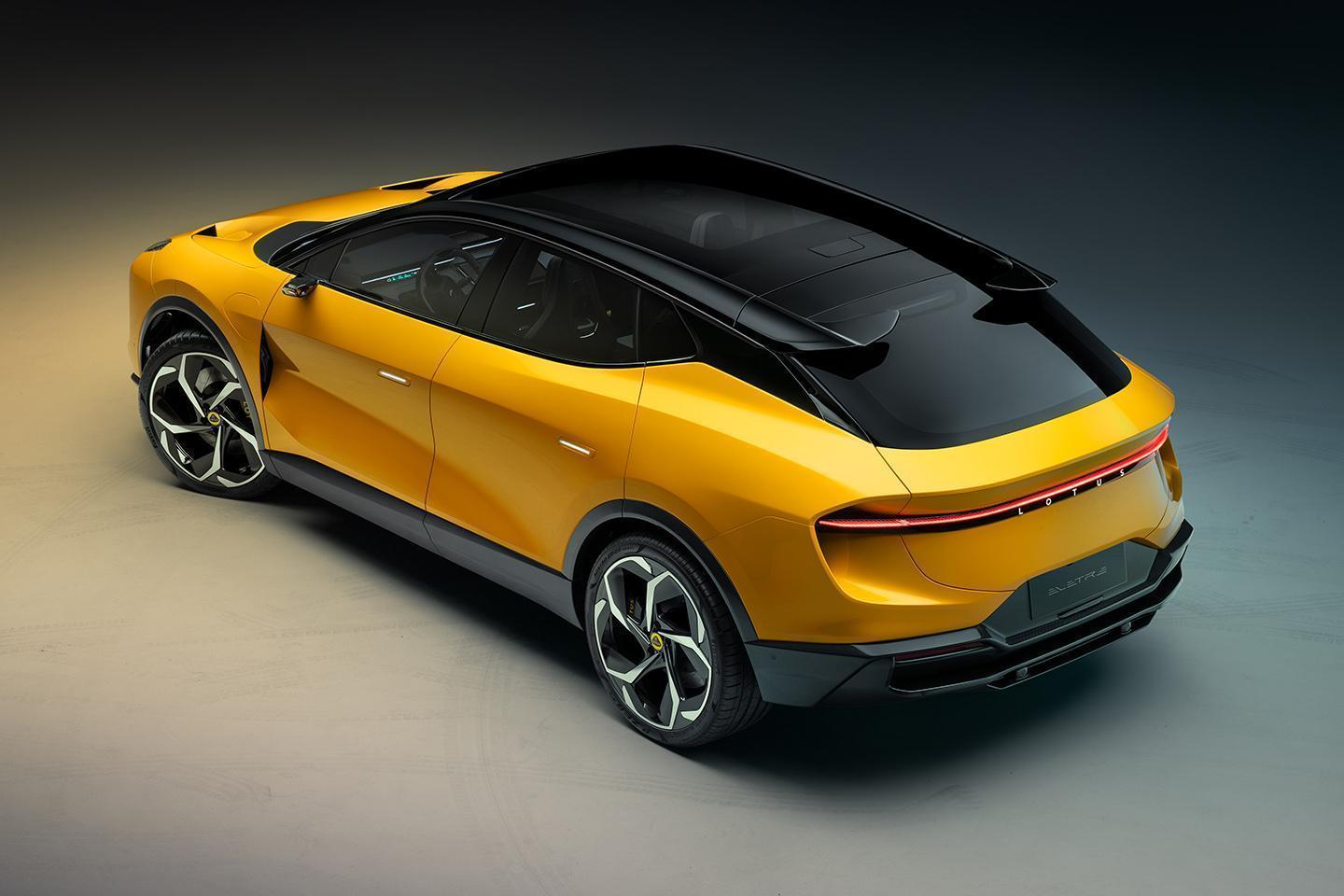 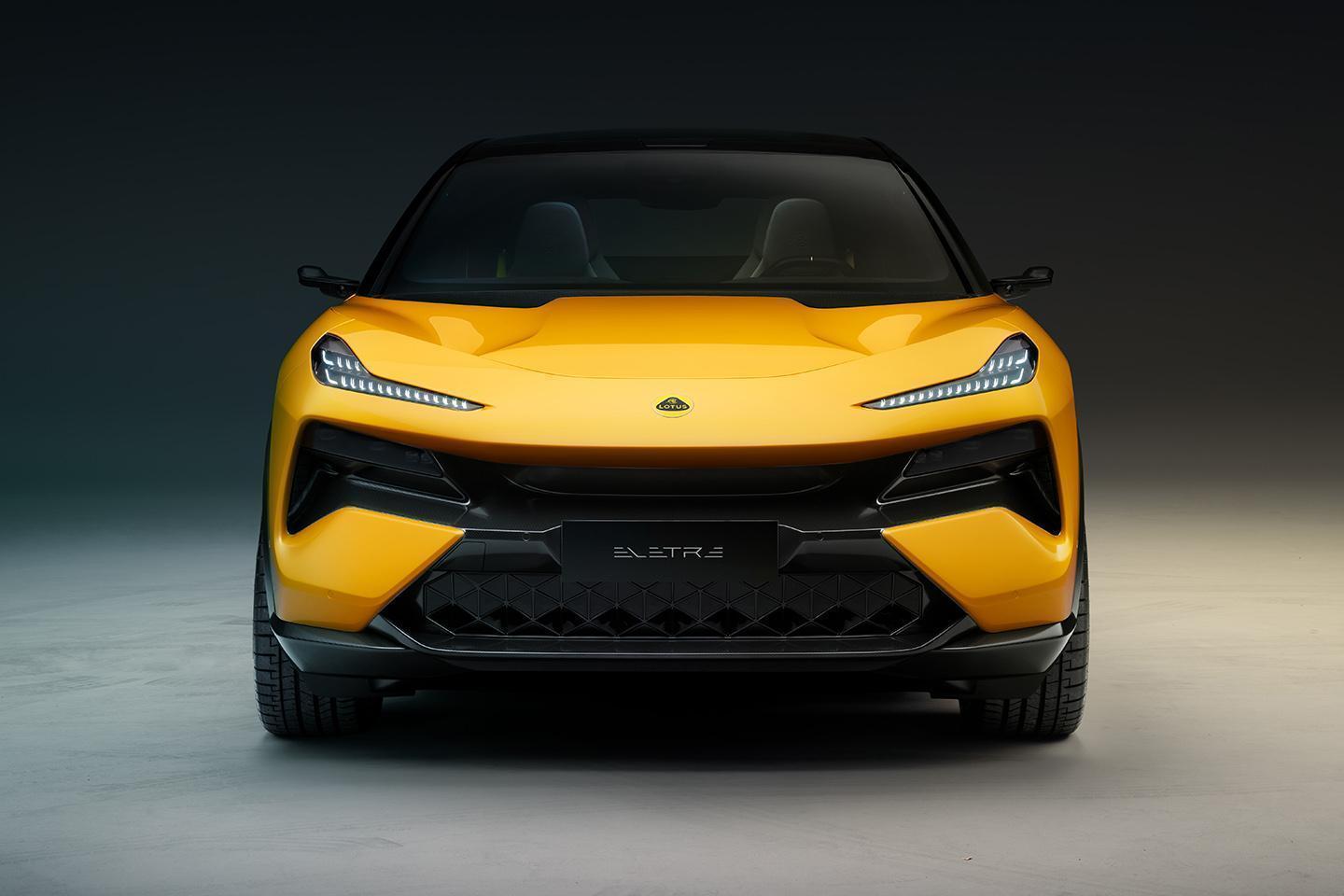 But the chance to get closer to the Eletre show car proved it actually has a more complex final form than the Urus, one that is defined as much by what’s missing as what’s present. There are substantial gaps in the front wings, bonnet and rear bumper to help channel and sculpt the flow of air over the car. “As Colin Chapman once put it, there’s nothing as light as a hole,” says Peter Horbury, Lotus’s design director when I talk to him about the car. Aerodynamics are further managed by an active rear wing element and a closing shutter in the front grille.

A likely bigger surprise, certainly to those of a more cynical persuasion, is that the Eletre sits on a completely different platform to the existing EVs from Geely Group’s other European brands. Both Volvo and Polestar use the existing CMA platform, but the Lotus sits on more advanced underpinnings. These combine a steel and aluminium structure with alloy panels and plenty of carbon fibre trim. What’s missing from the official release is any weight figure, but company insiders say the target is 2,000kg. Which would be enough to make the Eletre the heaviest road-going Lotus of all time, and roughly six times the mass of an original Lotus 7. But it would also make the new model more than 400kg lighter than the Audi e-tron or Tesla Model X. In this chunky part of the market, that would qualify as a good result.

The powertrain uses a new 800-Volt electrical architecture which will also feature in Lotus’s other EV models, and the motors are described as ultra-compact units with integrated controllers. It will support DC fast charging at rates of up to 350kW for those who can find a sufficiently potent plug; that will allow 250 miles of range to be added in just 20 minutes. 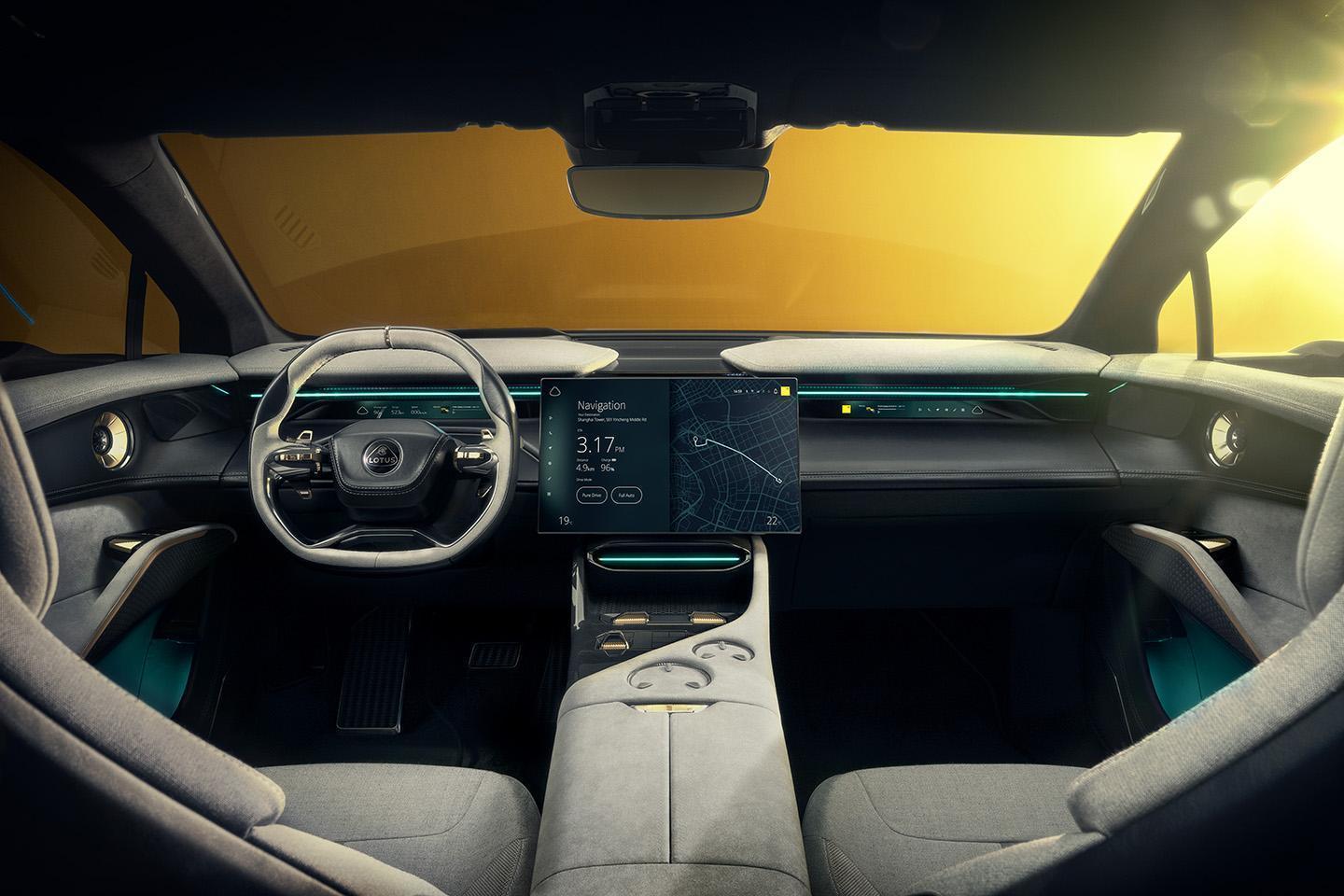 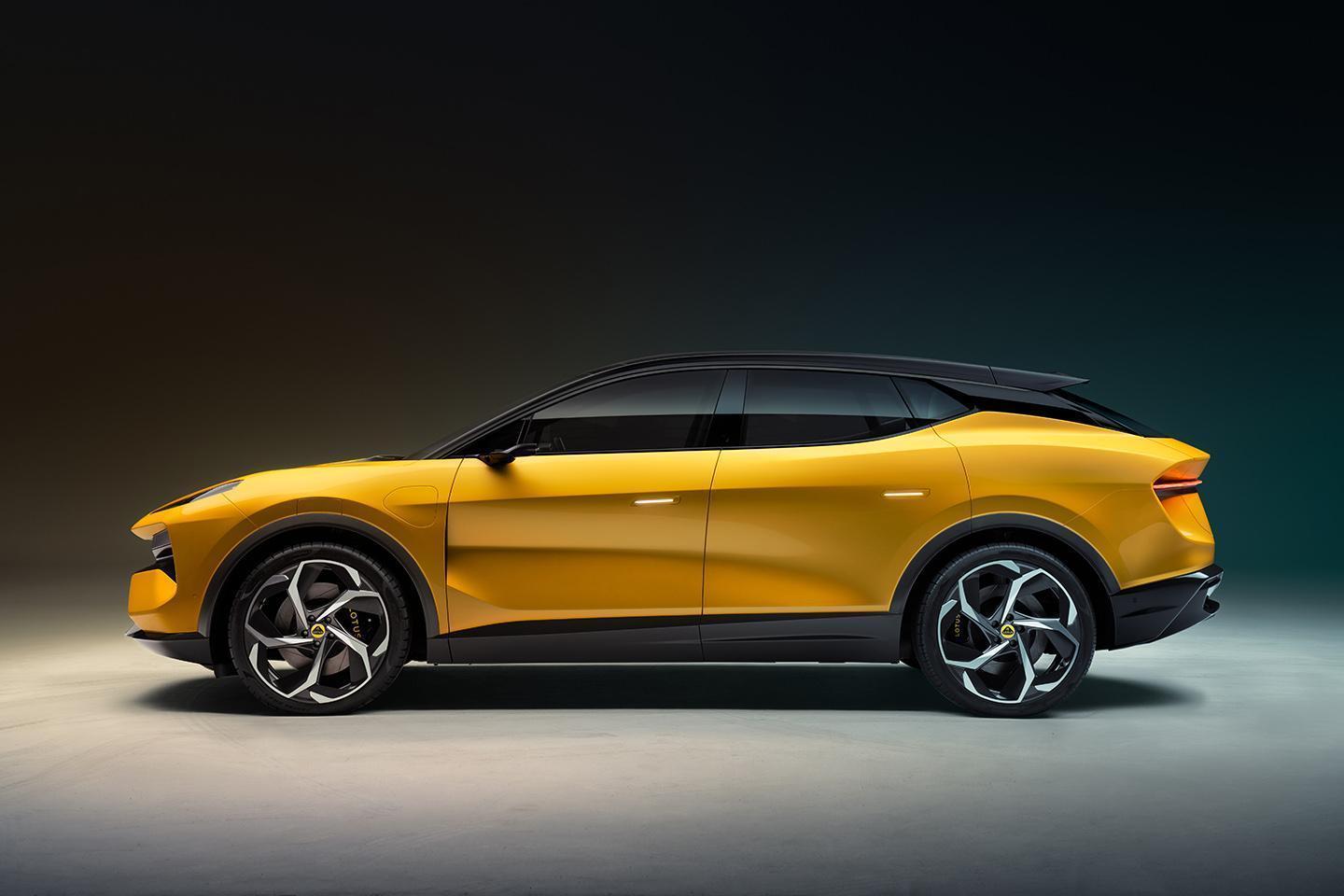 The Eletre will get adaptive dampers as well as height-adjustable air suspension as standard, the arrangement able to increase ride height by 50mm for what will likely be gentle off-road use, as well as lower itself by 25mm for improved stability at speed. Dynamic options will include active rear-axle steering, carbon-ceramic brakes and active anti-roll bars, but we’ll have to wait to see how much dynamic tech comes as standard on the production car. The show car’s five-spoke alloys are a huge 23-inches across – yes, that’s now a thing – but no Eletre will be produced for any market with rims smaller than 20-inch.

The powertrain and exterior design are one thing, but interestingly it’s inside that the Eletre feels like it is reaching the newest territory for the brand. Until now Lotuses have tended to possess functional, frill-free cabins – against which the Eletre’s stands out like a chandelier shop. Behold the huge 15.1-inch OLED touchscreen, seats and interior panels trimmed in high density wool blend (more traditional materials will be available) and, in the show car I saw, bronze-finished metalwork.

The Eletre will run a new user interface which Lotus insiders say definitely won’t be the Google-based system deployed by Volvo and Polestar, and although it wasn’t possible to operate this in this car, the company promises that 95 per cent of functions will be accessed through no more than three screen touches. There is also a cut-down digital dashboard display, a matching information screen on the passenger side, and rear seat occupants get their own smaller touchscreen. 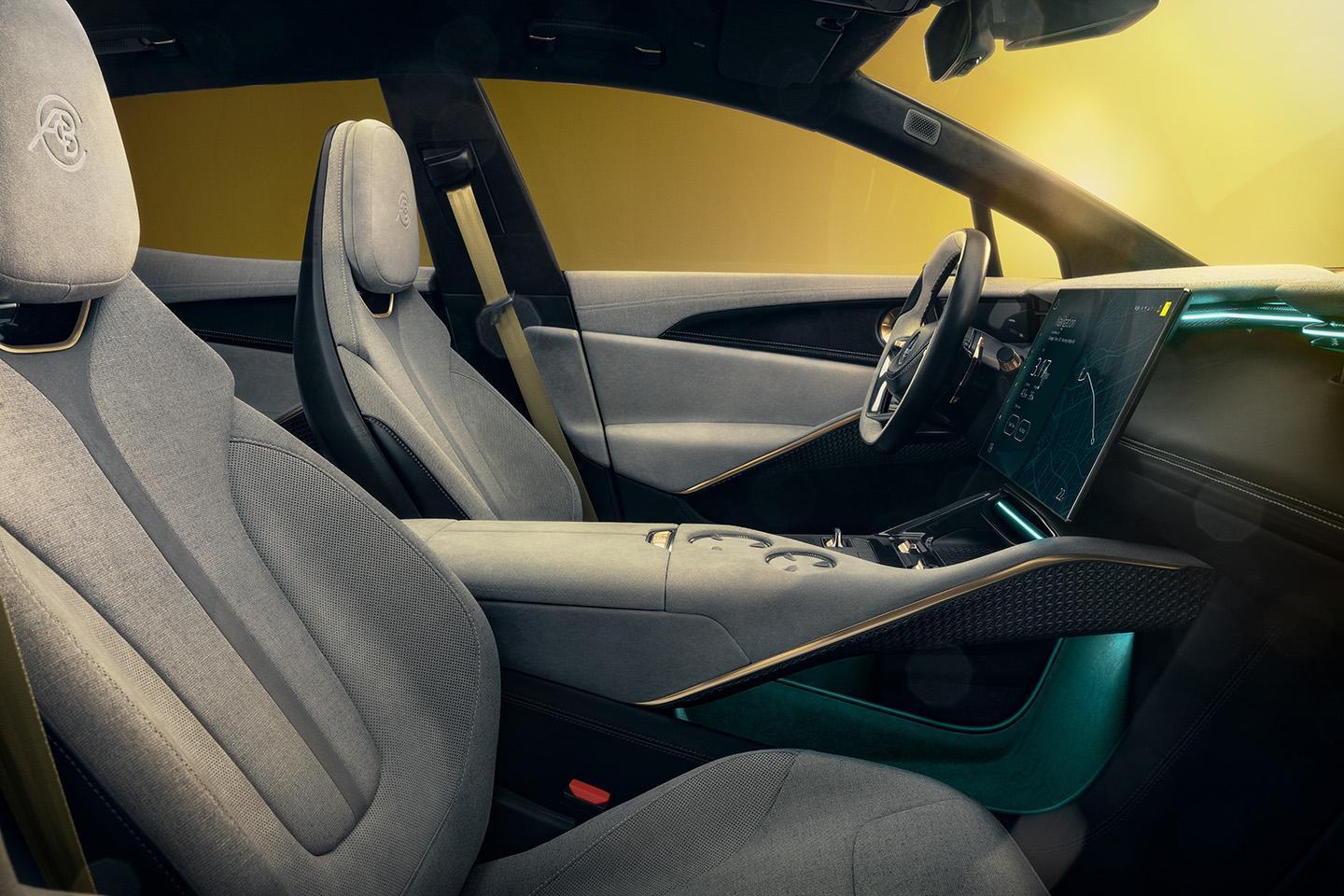 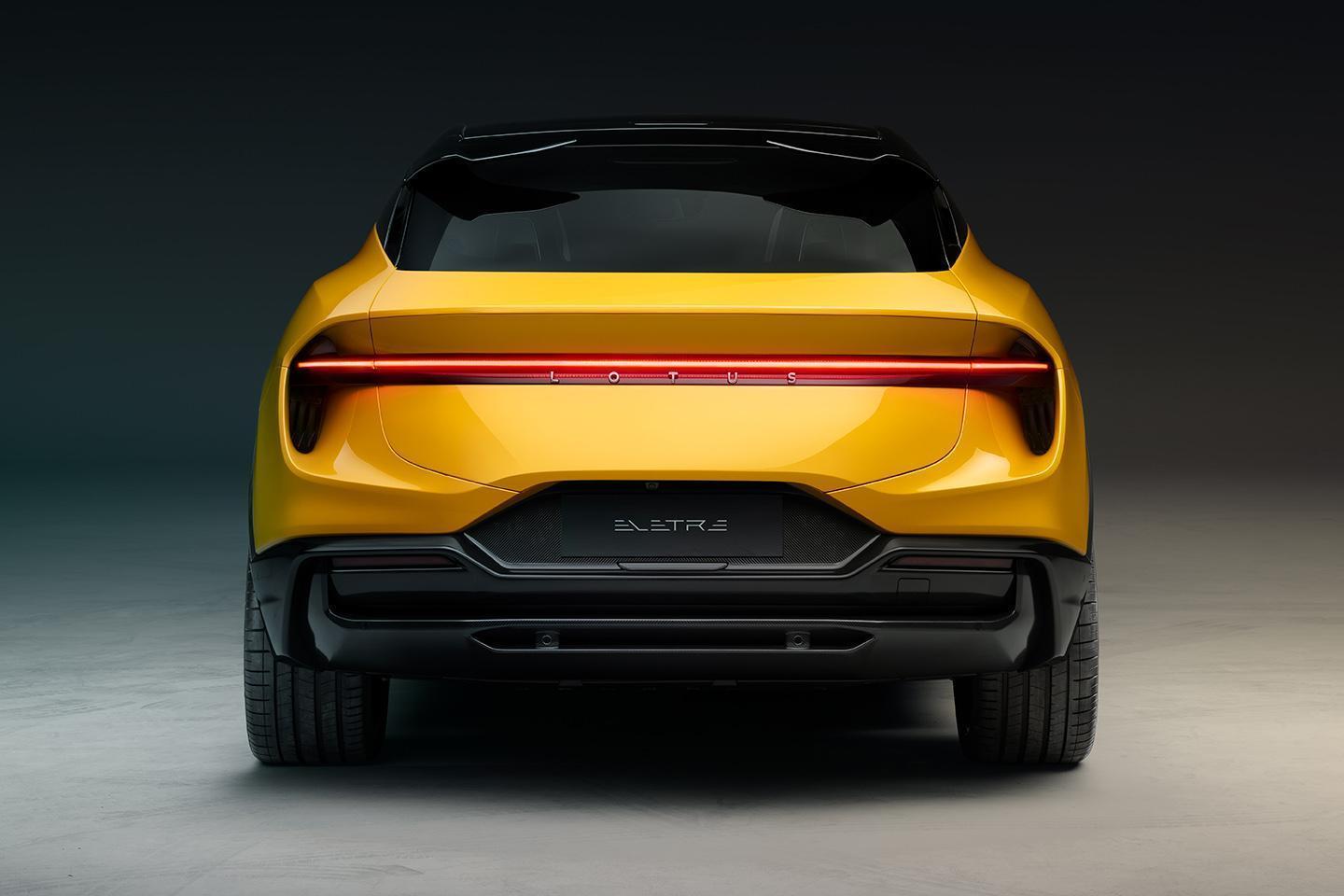 Does it feel like a Lotus inside? Not really – we’re well outside the frame of reference here. But some things are obvious early on. Firstly, that the cab forward design allowed by the lack of an engine up front has liberated an impressive amount of space, both front and rear. Secondly, that the Eletre is set to mark the point where Lotus jumps from tech also-ran to potential front-runner. Optional functions will include augmented AI to display additional information through the head-up display and – more radically – the promise of hands-off autonomous operation. Although these official images don’t show them deployed, there are pop-up LIDAR sensors on each end of the roof, plus another pair above the front wheel arches. These will motor up when the Eletre is piloting itself, with Lotus promising end-to-end journeys that will allow the car to be summoned from a parking space, do the Home James bit and then get sent back to the garage. From driver’s car, to non-driver’s car.

Other snazzy details include the full-length light bar at the rear, which will have full RGB functionality to allow it to show colours other than just orange and red. While moving it will be restricted to legally permitted stop- and turn-signal hues, but Lotus promises a showy “dynamic walk-up sequence”, and also that battery status will be visually indicated when the car is parked.

There’s no official word on pricing yet, although we’re told to expect the range to start around £100,000 when sales begin in the UK next year. That delay will of course be used to fill out some of the missing details – and gives us a bit more time to get used to the idea. Leading to the next question: what would Colin Chapman have made of such an exotic beast? Over to you on that one…