Car sales will total nearly 70 million vehicles worldwide this year, adding to the roughly 1.4 billion autos on the road across the globe. The automotive industry is massive and has grown and evolved quite a bit since the late 1800s when Karl Benz began selling his first handmade cars.

Vehicle evolution has been a constant throughout the industry’s history and it is arguably experiencing more changes now than ever before. Electric vehicles (EVs) are gaining mainstream appeal, creating the first significant challenge to powertrain technology since the combustion engine effectively created the automotive industry as we know it. There are several companies working to take advantage of this shift in the industry.

Let’s take a look at four automotive stocks that are poised to succeed over the long haul because their companies are adapting to the changing times. 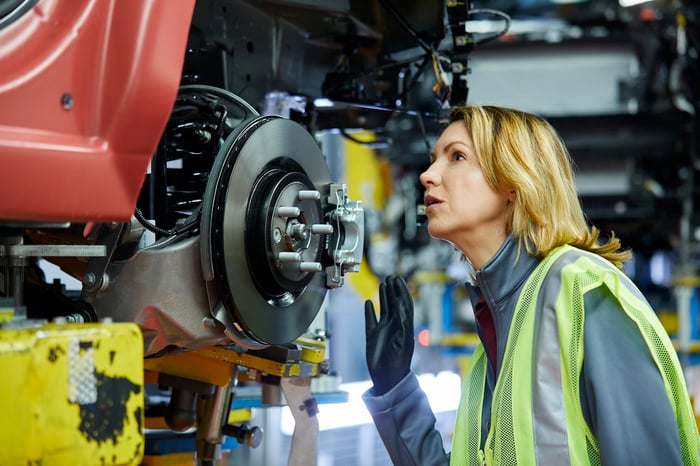 Many consider Tesla (NASDAQ:TSLA) the driving force behind the rise of electric vehicle technology. Its success with the Model S in 2012 forced legacy automotive manufacturers to respect and eventually invest in developing EV offerings of their own.

Competitors and investors alike doubted the company for years. CEO Elon Musk admitted that the massive investments needed to develop and then manufacture its Model 3 nearly put Tesla out of business.

Now Tesla’s profitable, generating $1.3 billion in free cash flow during its most recent quarter. It can help fund new factories in Berlin and Texas with roughly $16 billion in cash on its balance sheet. These factories will help build Tesla’s Model Y and the upcoming Cybertruck model. Tesla products account for roughly 15% of the world’s EV market, which could grow as new models (like the Cybertruck) are released and its self-driving technology continues to mature, though some of its competitors might say something about that.

Legacy automakers like General Motors (NYSE:GM) must balance their already successful business selling gas engine vehicles while embracing new technologies, including the rise of electric models. General Motors has made strategic investments for walking that line, which could position it to continue thriving as the automotive industry evolves.

The company has launched a “transformation strategy” that will focus long-term resources on developments in electric vehicle technology while retaining its profitable gas-powered models such as SUVs and pickup trucks in the short term.

GM’s target is to have 30 global electric vehicle models launched by 2025. Its GMC Hummer EV SUV and pickup models have seen strong preorder demand and will continue to roll out over several years. While Tesla is building new facilities on emerging financial stability, GM is converting its existing resources, including its “Factory Zero,” reconfigured to make its EVs. It hopes that electric vehicles will switch places with gas engine models as the driver of its business by the end of the decade.

Another major American car company, Ford (NYSE:F), is trying to balance the present with the future. The heart of Ford is the company’s trucks, as well as its commercial vehicle lines, which hold 43% market share in the U.S. Ford’s F-series trucks have been the best-selling vehicle in the country for the past 44 years, and its Transit Van series is the best-selling cargo van in the world.

It’s leveraging its most popular brands to enter the EV space, launching its “Mach-E” based on the Mustang brand and the “Lightning” version of the F150, both fully electric models. The company is currently trying to increase production capacity for the F150 Lightning to 80,000 units by 2024, which falls well short of Tesla’s 241,000 vehicles in the third quarter alone. However, legacy autos like Ford and GM still produce far more cars when you factor in gas engine models, routinely delivering more than a million vehicles per quarter.

Both Ford and General Motors are putting the resources and money into what is likely to be a long-term transition to EVs. But because EV model sales are still just around 5% of global sales, a “hybrid business model” that changes to EVs over time could allow for EV adoption without damaging the financials of these legacy competitors.

4. Genuine Parts: For those who want to keep their non-EV cars running

It’s important to note that the transition to EVs will not be an overnight thing for consumers or investors. It will likely take years for EV sales to take the majority away from gas-powered vehicles, and the average car now lasts more than a decade on the road.

Drivers will be repairing traditional vehicles as we know them for decades to come, which means business should remain strong for companies like Genuine Parts (NYSE:GPC) that cater to the used car market. The company is a leading distributor of vehicle replacement parts, primarily through its network of NAPA Auto Parts stores, which have roughly 9,500 locations worldwide.

The business generated roughly $1.6 billion in free cash flow over the past year, pays a dividend that yields 2.4% and that has grown the past 65 years in a row, one of the longest streaks by any public company. Investors looking for a more stable, defensive investment in the automotive space should consider Genuine Parts, which is likely to continue keeping used cars on the road for years to come, despite the steady growth of EVs. Even then, EVs will likely need replacement parts as well.